We may earn a commission for purchases using the links on our site.

Dehumidifier Or Air Conditioner For Basement? 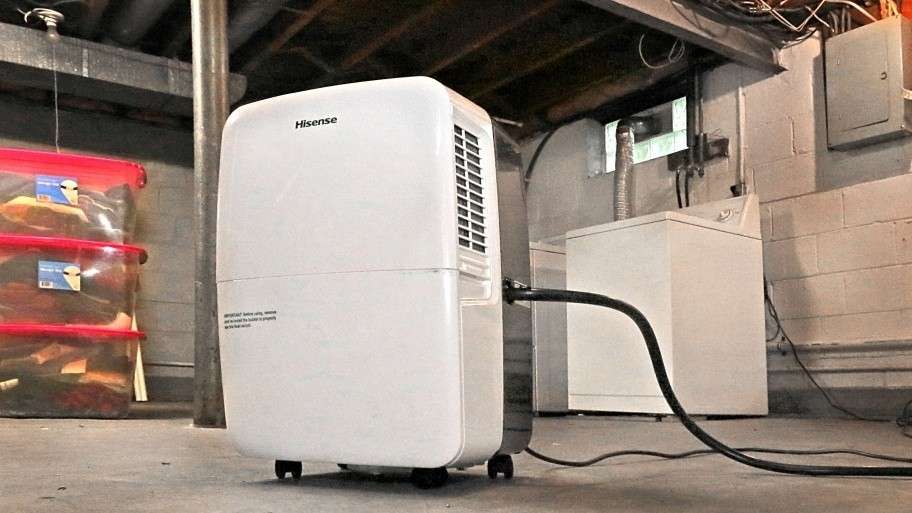 Would you rather use an air conditioner or dehumidifier in your basement?

It’s a common question among homeowners and one we’re going to answer.

Air conditioning reduces temperatures and reduces humidity levels in basements; however, they don’t work as well in very humid environments.

A good alternative is using a dehumidifier which removes excess moisture from the room, so it isn’t as moldy.

There are benefits associated with both appliances when used in a basement. But which is better for you?

Why Do Basements Have High Humidity Levels?

Basements are often humid because they are located underground, where there is a high risk of water leakage through pipes and the foundation. Since moisture can’t escape into the atmosphere, humidity builds up leading to several problems.

One problem is mold growth which is more prevalent in damp air. This can cause several health issues.

Stagnant water leads to weakening structures like cracks that expand over time turning structural supports brittle and weak until they eventually rot away.

Basement locations makes them prone not only to flooding from rain but also from household plumbing leaks.

The first step before doing anything is to check for any signs of water leak which must be fixed first.

The problem with basements is that they often have poor ventilation which leads to high humidity. This is undesirable as basements are often used to store items, all of which are negatively affected by dampness and moisture.

For example, photographs and books should be stored in a climate-controlled environment. If you're storing them in your basement or other humid storage areas, they will fade over time.

Luckily, there are loads of dehumidifiers on the market today which will keep your belongings safe from damage caused by excess humidity levels.

The best way to get rid of dust mites is by using a dehumidifier. Dust mites thrive in high humidity environments which can lead allergy sufferers experiencing allergy symptoms and breathing problems to feel worse.

A dehumidified environment has much lower levels of these allergens than a damp one, so we recommend investing in a dehumidifier for your health.

How Do Dehumidifiers Work?

Dehumidifiers work in a similar way to air conditioners. These devices cool down the air so that their capacity to hold water is reduced, which has a direct effect on how much water vapor can be held at any one time.

When it comes to deciding what type of device you should buy for your basement, the humidity levels in your basement will be the deciding factor.

Basement dehumidifiers are designed specifically for high-moisture environments like that found in cellars.

Dehumidifiers are always the better option for your basement. Air conditioners can reduce humidity, but they are much less effective.

Some homeowners choose to use both appliances in their basement. A dehumidifier to reduce humidity and an air conditioner to maintain a stable temperature.

About the Author Lets Remove Mold

If you're looking to buy a new dehumidifier then you're in the right place. Through years of HVAC and mold remediation experience, the team at letsremovemold.com are able to provide advice on the type of dehumidifier you need for your home.